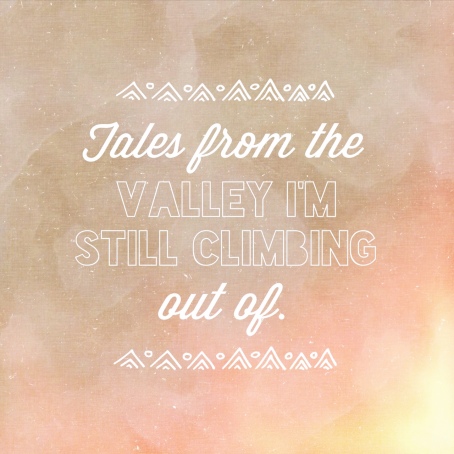 [August 2013]
Standing on the highest skiable peak in the United States, in the middle of the Wasatch Mountains, overlooking a city I knew He was calling me to, I heard His voice.

He had set my feet secure on the heights, and there He told me what this next season of my life would look like.

We’re going on a journey. From here, you can see everything: The road that winds down into the valley, every curve and dip it makes, in the dark places and the places where light breaks through. We’ll soon begin our descent, though, and you’ll see only what’s right in front of you, until we reach the heights again.

I have much to teach you on this road, if you will just follow me — you, my sheep, and I, your Good Shepherd. Though we will trek through the wilderness, in the valley of the shadow of death, you need fear nothing, for I am with you, and every step of the way is a part of my divine purpose for you.

Fear not, little flock. It is my great pleasure to give you the kingdom. Will you come with me?

I stood on that mountain, and I had a decision to make. He had clearly given an invitation. It’s never a forced thing with Him… we are so free as to choose whether or not to say yes.

So there I was, with an Esther sort of challenge on the table: He will do what He will do no matter what, but He has invited me along for the ride … and who knows if I’ve been called to His kingdom for such a time as this?

The answer was clear. Undeniable. Non-negotiable. I had to follow Him. My destiny is and always will be in His hands. Knowing that the refining fire was somewhere down in that valley we were headed towards, I set out on a new journey with Him, because I knew He had promised that it would be worth it.

So the descent begins, and it was just as the beginning of any downhill journey is — pretty enjoyable. Not too hard. Excitement still fresh, adventure still new, sun still beaming right down on my shoulders. I still had clear vision of where we were headed.

[October]
A little ways down into this pilgrimage, the sun set behind the mountains for the first time. The path was getting dimmer, and the road was getting colder. For the first time I began to doubt. Giving into that same sinful lie that Eve believed so long ago, “Did God really say that?” Maybe I had heard Him wrong. Maybe I was alone.

Isolation is one of our enemy’s favorite tricks. He draws us into the dark to steal, kill and destroy. But in swept that old rod and staff, my comfort, to pull me back to His side. Ah, yes. He is here. I am safe. Though it engulf me, the dark cannot win me.

So the downhill journey continued. Getting a little darker and a little harder every day. And this is the place where I no longer doubted that God had spoken, but instead I just began to cry out to Him, “Why have you drawn me here? When will we reach the places you promised? Why does this feel so dark and lonely? Don’t you know that I’m tired?”

[December]
I knew for sure I’d reached the lowest point of this treacherous excursion. The mountains towered over me on every side, and they almost seemed to laugh at me, taunting me in all of my smallness. And there, trekking through the woods, I heard the sound of running water. I followed it as it got louder and louder, and finally, there it was. A stream.

The thing about streams that run through valleys is that they usually cut right through the very lowest point. It’s there that we will find life if we dare go so far into the depths to seek Him.

And how thoughtful of Him to refresh us in the deepest places of uncertainty and pain, before the uphill battle begins. Suddenly it doesn’t seem so bad to linger in the valley for a while. He’s here.

I knelt down for my last drink of water, and there in the stream, there was a group of tadpoles. I watched them swim around, and all of a sudden they were growing right before my eyes, until a family of full-grown frogs followed one another right out of the stream and off towards the upward road I was about to set out on.

New life is coming. Keep going. I’ve drawn you here for a reason. Now follow this promise right up that next path.

[January]
Fresh vision is a good thing. I felt refreshed and envisioned again for where I was headed. I was ready to start climbing.

And now it’s mid February, and even though I’m nowhere near the next mountain top, I can feel the road getting smoother and the ground beneath my feet leveling. Because as I look back on the journey thus far, I cannot deny that He’s been present and faithful.

I could sit on mountaintops all the days of my life, but where would the treasure be found if we weren’t to go out seeking it? I am learning over and over again in this season that I love traveling long, winding roads with Him.

He takes me on adventures, and he shows me the entire land we’re to travel, first from afar, and then up close as we trek through the valleys and wilderness, finding every bit of gold along the way.

When I journey with Him, there are streams in the desert. Deep wells quenching my thirst in the driest of lands, for He is with me, and He is the well. Banquet tables prepared to feed me, even in the presence of my fiercest enemies.

In the rocky places He creates level ground for my feet to walk on. In the sun scorched lands He is a shaded place. In the winter’s cold He is a warm fire to sit near. Always what I need, and ever leading me into the places He promised.

We aren’t there yet, of that I’m certain. There will always be a deeper longing unfulfilled on this side of Heaven — of that, I’m also certain.

So I keep clinging to Him, I keep walking along the path He highlights, and I find the hidden treasure in every stop along the way. Like a scavenger hunt where the grand prize is a greater measure of His presence. This is His intention for the adventures He takes us on.

Perhaps there are no true destinations, only resting places before the next adventure begins.

Count me in, Abba.

One thought on “Tales from the valley I’m still climbing out of.”