So I’m a little bit jobless at the moment, which also means I’m a little bit bored. My general rule of thumb in this weird in-between season is, “Allow yourself to rest, but don’t allow laziness.” I’ve been writing, cleaning, planning, dreaming, reading, walking, volunteering, and… experimenting. It’s a strange, confusing season, and when life hands you lemons… you make lemonade, right?

A few weeks ago, I had a glass of lavender lemonade at a local coffee shop here in Waco, and it kind of changed my life a little bit. I don’t think I’ll ever drink plain lemonade the same. Ever since then, I’ve been thinking about it, wondering if I could somehow concoct the same glorious creation in my own teeny tiny kitchen.

I probably could have just called my friend who manages aforementioned coffee shop, but where’s the adventure in that? I’m bored and I need some excitement in my days! So off I went to the grocery store for lemons and lavender. Did I know what I was doing? Probably not. Did I pretend I was a lavender buying, lemon squeezing, fancy drink making expert? Absolutely.

The photo I posted at the end of it all is definitely much prettier than the process was (such is life, I suppose), and I’m not usually one for posting recipes (mostly because I know the things I create in my kitchen are not all that fancy, and my photos definitely don’t usually look like they belong on Pinterest), but by popular demand, I’m sharing the recipe with you here today. Let’s use the term “recipe” loosely, though, folks… if you’re one for exact measurements I’m just going to warn you now that this was a total guessing game.

So strap on your adventure boots, your safety goggles (lemon squeezing can be very dangerous) and your party pants, and enter my teeny tiny kitchen at your own discretion.

Step One: The stuff you put in this stuff

I think a standard pitcher is like two quarts, right? All I know is that mine is from Anthropologie and it’s really cute, and it’s probably somewhere in the ballpark of two quarts. We’ll go with that. Ready your two quart pitcher.

I bought 10 lemons, and I currently have four left, so basic math would say that I squeezed the juice of six of them into my pitcher, but I’m pretty sure I used one just for garnish. (Basic rule of anything you ever use from Anthro: you must fill it with only pretty things. Therefore, garnish.)

I’m sure you can probably use some sort of lavender extract or syrup and get the same effect for less work, but lavender flower is so cheap, and it’s pretty, and if you have some leftover you can put it in something cute and make wherever you set it smell like heaven. So I just got a little bag of lavender flowers, for a whopping 80 cents.

The mint was an afterthought, because I happen to have some growing in my kitchen. It was a fantastic afterthought, though, so I recommend some fresh mint also. Again, you could use mint extract, but it would lose that fresh mint taste and your glass would be WAY less pretty. (Things that matter) 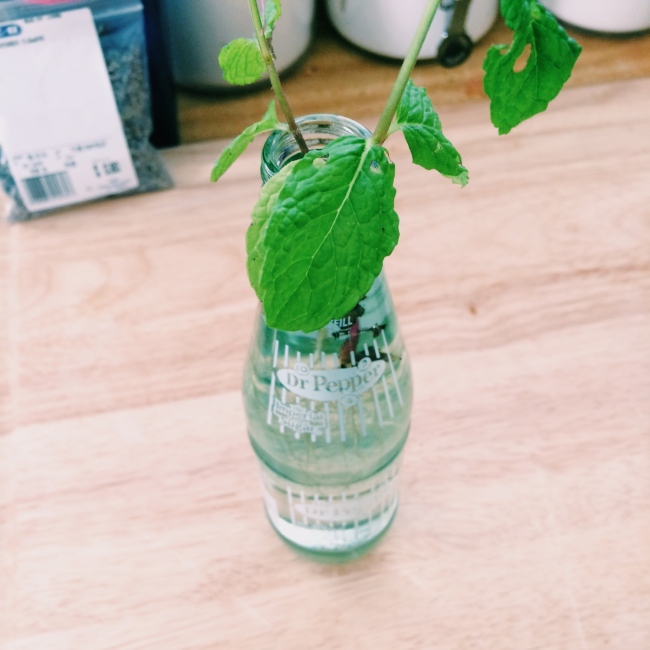 All this to say, you need:

Moving on. Step Two: The stuff you do to the stuff before it goes in the stuff

This is easy, folks. Cut your lemons in half and squeeze all the juice into your pitcher. If you have a citrus juicer press, use that. I have a big juicer that I didn’t feel like going to the trouble of getting out/cleaning just for five lemons, so I just squeezed them with my hands. It was a sticky time, but it got the job done.

Once all your lemon juice is in your pitcher, add water. Then sweeten it with your sweetener of choice. I used Stevia. If you want it to taste like that fresh squeezed lemonade your grandma used to make, you’re probably going to have to bite the calorie bullet and use real sugar. It’s probably worth it. Get it tasting like good, normal lemonade before you move on.

OK. Lavender. Here’s where maybe the extract/syrup is worth the extra few bucks. I just threw a handful of lavender flowers into the pitcher and stirred it up/let it sit for a bit. This will make it taste delicious, yes, but you’ll probably need to pour it through a strainer before you drink it. Unless you’re into swallowing whole lavender flowers. What I ended up doing was straining the first handful of lavender I threw in there out, and then I wrapped some up in a coffee filter and let it just float in there.

It looked weird. But it worked.

Don’t forget to slice up that sixth lemon you saved and throw them in the pitcher! They just look cute floating around in there.

I’m not entirely sure how long I let it sit and soak up the lavender before it tasted just right. Maybe give it 20 minutes or so, and try it? Once your lemonade tastes nice and lavender-y, pour it over ice into a glass, and add your fresh mint leaves. (Adding them by the glass instead of into the pitcher just makes it taste more fresh.) 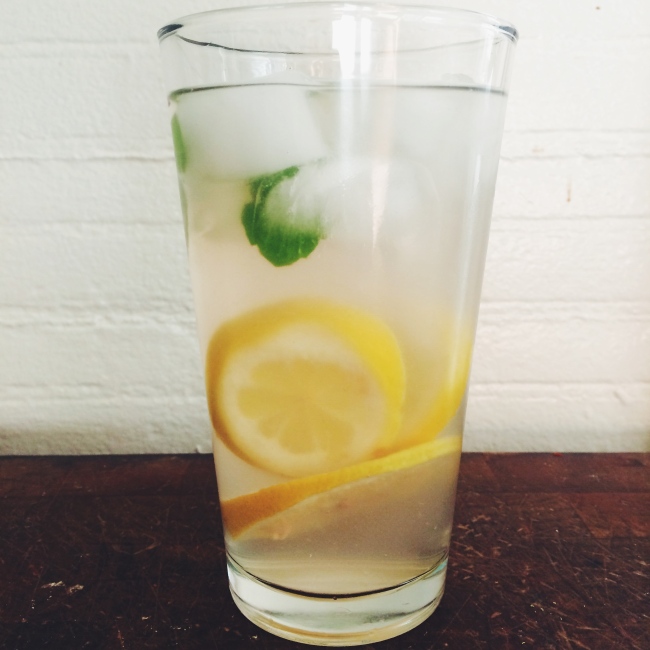 Boom. You have a life-changing, summer in a glass, sit on the porch and watch the kids play in the sunset, glass of lemonade.

From my teeny tiny kitchen to your probably way more spacious and pretty one, you’re welcome. And happy experimenting.